Unexpected female child as a factor of population growth 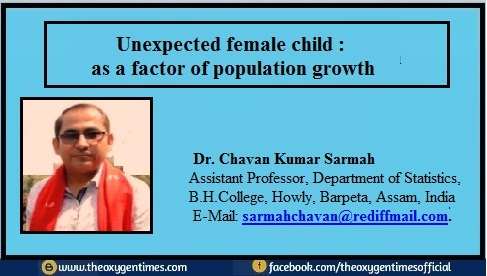 as a factor of population growth

“The power of population is indefinitely greater than the power of earth to produce subsistence for the man as the population is growing geometrically while the resources to support it are growing arithmetically”.  - Thomas Robert Malthus.

Rising population in our country was once considered to be an asset when there was a need for more hands to take part in various fields. But this boon has now turned out to be a bane because the country’s population has touched the danger mark. Population grows as a result of reproductive activity and hence females are the actual proprietor of a new birth. Every moment additions are being made to the population by new births and each year’s addition to Indian population is equal to the entire population of Australia.

Illiteracy, poverty, superstition, migration and status of women in society are the always speaking issues of population growth. In this discussion an attempt is made to discuss searching for or preference to male child in our families as a factor of population growth. India is basically a patriarchal society. As such, majority of Indian families always prefer male child to continue their generation or to retain the family name which result in the unexpected birth of a female child. Son preference is extremely strong in Eastern Asian countries and in some regions of Japan, Korea, Taiwan and China. In a patriarchal society, it is the son who is entitled to retain the family name. So, the essence of son preference rests on the continuation of life from parents to children and it becomes a religious comfort to these people.

Continuous preference of male children in the families’ usually enhances a degree of desire for more children. As a result, number of unexpected female births may take place in the families and thus enlarge their size. From the demographic point of view more females (future mothers) contribute to more births and increase population figure. In literate middle class Indian families we observe two types of preferences regarding male child – at least one male child required and two male children preferred. On the basis of these two ideologies we establish the following models to expose how the unexpected female children are being born in the thousands of families in four children norms.

1. male + female + female + male; here third born child is supposed to be unexpected because if the third child be a male then fourth born would not occur and hence four children family would be of three children norms.

2. Male +female + female + female; here the third and fourth born child are supposed to be unexpected because the family expected one more male child.

3. Female + male + female + female; here fourth born female child is supposed to be unexpected because the family searching one more male child in their home.

4. Female + male + female + male; it is a balanced family but if the third born child being a male then the degree of desire for more children in this family would decline and hence we would not to be added one more addition in population figure.

Under the above two ideologies it is clear that number of unwanted births take place in the thousands of families without any hesitation. Women with only girls as previous children would time their next birth more rapidly than those with only boys as previous children. Thus fertility behavior is determined by the sex composition of previous children. Under the ideology of at least one son, Indian families with female children are reported to be more likely to have or intended to have more children. Thus child sex preference affects fertility behavior when people make decisions on the next birth. The degree of desire for more children in families with no son is significantly higher from that in those with a son. Families with balanced mixed sex children under the above two ideologies would be more likely to stop childbearing. Thus fertility rate or birth rate is largely affected by the preference of male child. Hence searching male child (if a female child born then she is supposed to be an unexpected child) of the families contributes as a factor of population growth. These results in the decline economic condition of a family and thus female children are deprived of adequate facilities of education, food, freedom etc. Ministry of Women and Child Development, Government of India, in their eleventh five year plan for Girl Child (2007-2012) mention girl’s nutritional intake is inferior in quality and quantity while boys have access to more nutritious food. As a result, 56 percent girls of the age group 15-19 years suffer from anemia. Gender inequality thus begins in houses a mother usually prefers a son to a daughter. This is one of the important issues of women empowerment. These all are rising due to searching male children or unexpecting female children by individual families. As average Indian families prefer male child, therefore, Government of India have implemented several policies to save a female child from being killed before its birth. We Indians call our nation mother India and are great devotee of Mother Goddess in various manifestations. We say that we worship Maa Saraswati, Maa Durga, Maa Lakhsmi, and at the other hand we are continuously trying not to give birth to a female child in our families. The latest and innovative techniques of gender detection have encouraged the child preference ideology which leads to higher female feticide rate in India.

The problem of population growth has to be tackled on war footing and for that purpose our political leaders, administrative officials, the NGO’s, the media, the universities, teachers, students, social workers etc. must show pragmatism and vision besides a strong will to do the best that they can in this regard. This problem should be considered first in the list of problems to be addressed. Population control is not an individual’s duty. It should be a people’s movement that should concern every member of community. Some of the reformative steps that our government may think of to control the problem of population growth are discussed below.