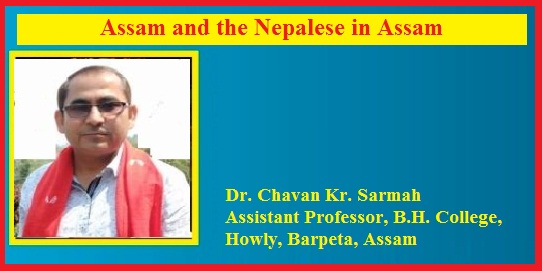 Assam is one of the beautiful and attractive tourist and settlement destinations of the nation. The state of Assam is rich in its natural beauty, resources and in the ethnic cultural diversities. Varieties of ethnic communities, integrated cultural and religious diversities are the essence of the beautifulness of the state. Nepalese also known as Gorkhali or Gorkhas is one of the largest and most colorful ethnic communities of the state Assam. It is a very diverse community that includes people of Aryan, Mongolian and Tibetan origin. There are number of sub-communities namely Brahmans, Chetry, Rai, Limbo, Newar, Magar, Sherpa, Gurungs, Tamang, Kami, Domai, Dhami etc. which have distinct culture, customs and different languages but they all identify themselves as Nepali or Gorkhali and speak Nepali language. Though the Nepalese speak Nepali a language of Indo-Aryan family they use Assamese as a lingua franca.

The Nepalese found in the land of India especially in Assam since ancient time but limited during the pre-British period. According to Grierson[1968], ‘The Tibeto-Burmis speaking Mongoloids with yellow complexion came to be known among Vedic Aryan as Kiratas. Their presence is attested through literacy evidence by about 1000 B.C’. On the basis of Mahabharata, Devi [2011] argues that these Sino-Tibetans as Kiratas belong to the Brahmaputra Valley of ancient Assam. Sinha[2003] mention that Nepalese of Assam as Kiratas were Hindu whose original home was in the Himalayan slopes and in the mountains of the east, in Assam particularly yellow complexion presented distinct type of culture and spread over the plains of Bengal up to the sea. According to Subba [1998], ‘The ancient Kamrupa Kingdom is, for instance, known to have its boundaries extended right upto eastern Nepal as late as 1520, the two Kamrupa Kings- Nidhwaj and Narayan had married the princes of Nepal.’ A number of studies in this direction established the fact that there were matrimonial and cultural relationship between Kamrupa and Nepal from the time of King Harsabardhana and Biswa Singha the founder of Koch Dynasty. According to Upadhyaya [2002], ‘Ratikanta Upadhyaya’ the first ‘Satradhikar’ in Nepali satra, Teok of Jorhat district, was of Nepali origin which reveals that the religious settlement of Nepalese in Assam began since the era of ‘Sankardeva’. In the Linguistic Survey of India, Grierson [1968] argued that in 18th century Nepali language was among the Indian Languages. The all studies discussed above established the argument that Nepalese were in India or in Assam since ancient time.

The actual immigration of the Nepalese to then Assam (north east India) began in early 19th century especially after the treaty of Sugauli (1816) between British India and Nepal. According to this treaty, Nepal had to transfer some of its bordering areas like Darjeeling, Sikkim, Shimla, Nainital, Almora, Deheradun etc to the British India and therefore Nepalese residing in these areas become automatically the subjects of the British India and now India. Thus Nepali immigrants found in Assam politically of two categories namely inter-state immigrants and foreign immigrants that is Nepalese entering in Assam both from the Nepal as well as some other Indian states. Goswami [1988] on his study of the economic development in Assam has mentioned that Nepalese immigration into Assam has been from three clusters namely from different parts of India, from Eastern Bengal and from Nepal as livestock farmers. Social scientists have long attributed the Nepalese settled in northeast India particularly in Assam since 1820 with a migratory nature, either in search of economic opportunities or grazing lands for cattle crucial for their primary business of milk production, which finds them constantly moving not only across the open India-Nepal border but also across the seven states that constitutes northeast India [Nath, 2005]. Recruitment of Gorkha soldiers to the British Indian Army after the treaty of Sugauli was one of the important causes of Nepalese settlement in northeast India or in Assam. Further the British recruited civilian Nepalese from different parts of India as well as Nepal in non-military services as chowkider, peons, labourers in various organizations and factories in Assam. Indo-Nepal Friendship Treaty 1950, which ensures open border transportation, equal rights and privileges of both the Nationalities, reinforces the settlement of Nepalese in Assam in post independence period.

The growth of the Nepalese in Assam is deeply embedded in the history of the region but showed a marked growth in the 20th century actively encouraged by the British who sought an increased revenue collection through the settlement of Nepalese in this region [Devi, 2007]. In post independence period the Indo-Nepal friendship treaty reinforces the growth of this community in this region.

In recent years, Assam has seen number of insurgencies against foreigners specially the Bangladeshi immigrants as well as Hindi speaking people. Interestingly the Nepali population has hardly been victimized by the anti foreigner movement in Assam. This reveals that the native Assamese has accepted the Nepalese as Assamese but not the other foreigners. One of the causes of less victimized may be the Nepalese preferred to get much integrated and assimilated with the Assamese culture, custom and language than any other immigrants groups in Assam. Nepalese in Assam usually identifies themselves as Assamese-Nepali, a new ethnic community in Assamese society maintaining individual language, culture and custom. The Nepalese were able to cope up with the Assamese both socially and culturally to great extent in the land of Assam and being the unavoidable part of this region of the nation.

Now these people have an important impact on the population dynamics, socio-cultural and economic foundation of the state as Nepali is the 5th largest language group in Assam sharing 1.91 percent contribution (census report 2011) to the total population with relatively assimilating nature with culture and custom of this part of the nation.