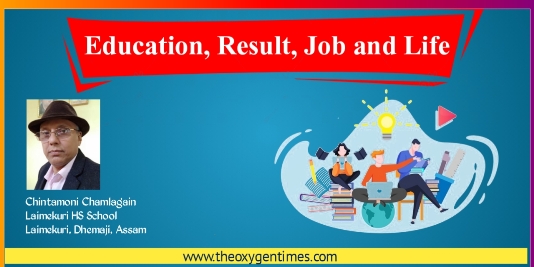 Rainy season in India is the season of school results too. It is in this season that the results of two important examinations, namely classes ten and twelve, that pave the careers of students, are declared. Students are flamboyant and thrilled to step in a new institution for higher education in a new atmosphere after the results and the parents are exuberant either. T.V. screens display the jubilant countenance of promising students. They fill news paper pages; columnists pen down analytical essays in series on youngsters and education, the role of  parents, teachers and the society in children's learning. Institutions celebrate their students' victory with pomp and circumstance. Parents begin nurturing their expectations more vigorously and add new dimension to their dreams.         Admission counters of colleges are thronged with busy huge congregation and floors are bustled with rat-races. There's comfort in commotions everywhere. Successful candidates are much talked about. Unsuccessful children, on the other hand, are lost in oblivion, ignored and uncared. The society forgets to realize that the results of mere an examination can neither determine the fate of a student nor can it be a measuring rod to gauge the genius of a student.
Every baby is born with art and artistic temperament. This latent calibre (and the flaw as well), greatly influenced by the social atmosphere of his living, gets nurtured and enriched in due course of time and plays a significant role in the making of the character and personality of a baby in his later life. It is here that his parents (who play the pivotal role), the members of his family, his neighbours, his friends, his school mates and (mostly) his teachers are at bully-pulpit and marked influential. They contribute in the making and marring of a child's career. The success and failure of a child is greatly attributed to all the people and the society closely associated with the baby. The latent talent living in him and the social surrounding that influence the child's character and personality,  in competition with each other, creates a kind of driving force which leads him to search, find and latch on to the work of his interest and intellect.
Doing a job, in the later life of the baby, as a means for the sustenance of one's living is a different topic of discussion with yet at another purview. The topic of discussion here is not what you do in life. It is focused on how you do a job. Here, we are not concerned with how great a job you are able to bring to fruition, but how greatly you render your service.
Life has a vast and fathomless extent of its own kind in which our individual interests are tossed up and down and we are hurled to clinch anything that come our way to sustain ourselves. Only a few can attain at a profession of their dream and lead their life happily.  Many drag it and lead it with a fuss instead.
The intelligence reflected in our certificates (percentage, degrees, diplomas, etc) issued in recognition and with honour by educational institutions, boards, and universities may help us procure a job (means of sustenance of life), but the education (morality, sincerity, intuition, sense of justice, honesty, dutifulness, loyalty to the society and the nation etc.) earns us dignity and glorifies our life. So it is not the magnitude of our job, but the magnitude of the manner of our doing a job that makes a man great. There are divergent ways through which we can live and lead our life according to our interest.
So, let's console the students who are not in the list of successful candidates and make them read the difference between an examination and the life. Aren't there the instances of unsuccessful children at schools who have risen beyond horizon in their later life following their path of interest? Life has a brighter and greater goal than that of institutional education.