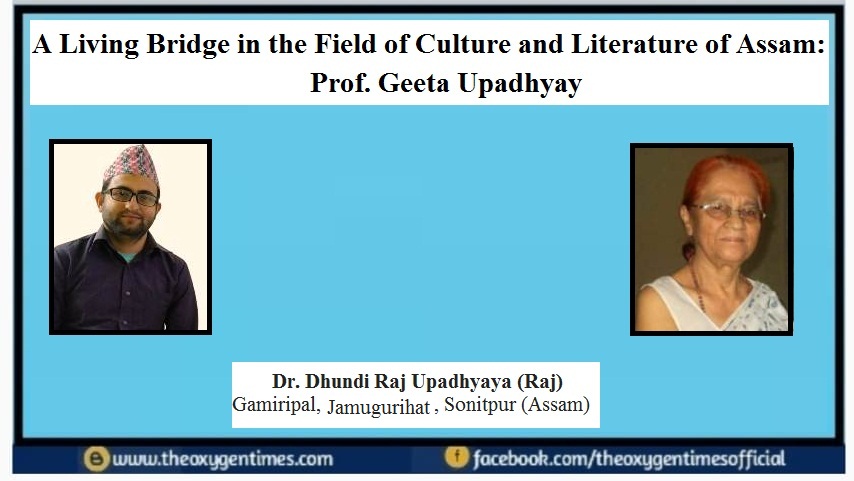 From the beginning of mankind, woman occupies a vital role in the whole spheres of life. The first component of our society is home and where woman plays a great role as a mother and she is the first preceptor of her child.   A woman plays an important role not only in building a society but in the well establishment of culture and literature too. The tradition of our nation has been placing a woman in a great position from the ancient to till date, because of her relinquishment and active involvement in our society. The life of a human begins from her/his home, where the mother plays a significant role in upbringing her child. There is no doubt that a mother is the first and the best Guru of a child. So, Maharshi (Sage) Manu says that, our culture and tradition places the mother before the father and a teacher, i.e.,

Professor Geeta Upadhyay, renowned litterateur of Assam is playing significant role in the society by contributing in the field of culture and literature of Assam. Unlike other literati she started publishing her literary compositions after her formal education. Therefore, it can be said that she was concentrating herself to earn knowledge during her formal education, which helps her later to compose valuable literary works. Before discussing about Professor Upadhyay’s contribution and the role in the society of Assam, we have to include her earlier life. She was born in 1939 at Gangmauthan village (Behali) of Sonitpur District (presently Biswanath) . Tanka nath Upadhyay was her father and the name of her mother was Bhagirathi Devi. She is the grand-daughter of the great freedom fighter Chhabilal Upadhyay. She is the elder and only girl of five uterine. Professor Upadhyay started her formal education from Gangmauthan Valika Vidyalaya (primary school) in 1944 and completed her 10th from Behali High School in 1955. After the 10th she went to Handique College, Guwahati from where she completed her IA and BA in 1957 and 1959 respectively. At that time she ended her formal education and went to Nepal. In Nepal she started her professional life as an information officer of Nepal tourism department. But her mother and her grand-father did not like to serve any other country. So, she came back to India and got appointed as a teacher in ‘Condense Course’, a government course and concentrated herself to higher studies. During this period she completed her MA degree in Political science from Gauhati University in 1965. It is mentionable that she was the first Nepali/Gorkha girl of Assam, who passed BA and MA degree after independence. Again Professor Upadhyay was continuing teaching profession as a lecturer in Sivasagar College from 1965 to 1999.   Professor Upadhyay has started her journey to the world of literature being inspirer by her father Tanka nath Upadhyay, who translated some famous plays of the great Shakespeare. Through this inspiration she has translated ‘The Diary of Anne Frank’ from English to Nepali and Assamese. The translation of ‘The Diary of Anne Frank’ has made her as the translation specialist in specially Assamese and Nepali literature. She is popularly known among the readers as the translation specialist from Assamese to Nepali and Nepali to Assamese. Professor Upadhyay is greatly influenced by Gurudev Rabindranath Thakur (Tagore). She earned the knowledge of   ‘Rabindra Sangeet’ from her mother. This is indicating her transparency on these four languages (viz; Nepali, Bengali, Assamese and English), which helps to make a bridge of unity among the three communities of Assam.   She has been connecting with Asom Lekhika Samiti from 1977. She resided the post of Vice-Precedent of this organization for a long period and took the responsibility of the President from 2000 to 2003. At the same time the organizers of Assam Nepali Sahitya Parishad also attributed the responsibility of the President post, and then she resigned from the President of Asom Lekhika Samiti. From this, we can imagine her efficiency and popularity among the literates. She has been not only connecting with the state organizations but with the National and International organizations too. She is the honorable member of Sikkim Academy and Gorkha Parishad. Professor Upadhyay is the permanent member of Political Science Organization of India & Women Education Organization of India. Through the inspiration of her father she translated ‘The Diary of Anne Frank’ from English to Nepali and Assamese in 1972, which is her initiate work in the translation form. After this work she has translated ‘Bhanubhakta Ramayana’ (of the Adikavi Bhanubhakta Acharya) Nepali to Assamese (1987) and Muna Madan (Nepali to Assamese in 1998). Her other famous translation works are - ‘Abhiyarti’ of Nirupana Bargohain (Assamese to Nepali 2010),  ‘Bhumiputra’ (English to Assamese in 2008), ‘Karmavir Dhan bahadur nij abhibyaktir daponat’ (Nepali to Assames in 2008), Kala suruj (Nepali to Assamese in 1998) ‘Rajdarbarki susari’ of Jyoti Prasad Agarwala (Assamese to Nepal in 2008).  Professor Upadhyay has composed her many valuable original works, some popular works are – ‘Nepal deshar sadhu’ (Assamese in 2001), ‘Suvasit batah’(Assamese2004), ‘Ma moi first holo’(Assamese1997), ‘Ama ma first bhaye’ (Nepali in 1998), ‘Mahapurush Sankardeva- Jivan ra karma’ (Nepali 2003), ‘Mandakini ra Alakanandako tireitir Kedar Badrisamma’ (Nepali in 2002), ‘Kathanjani’ (Nepali in 2008). The plots of all stories of  ‘Kathanjali’, a anthology of short stories, have taken from the life of common people,  this story book has made a stirring situation in Assam, West Bengal, Sikkim and Kuwait among the readers. For this famous work she has been honored the best story writer by Sahitya Prakash Samiti , Govt. of Sikkim.   She has been awarded Sahitya Academy Award by Govt. of India for novel  the “Janmabhumi Mero Swadesh” and Sahitya Academy Traslation award for ‘Rajdarbarki susari’ (Nepali). For her notable contribution in the field of literature and research, the Govt. of Nepal awarded her the Bhanu Samman (Rashtrapati Puraskar of Nepal). She has been honoured with ‘Abhijaman katha puraskar’, an International award from Kuwait for a serial story of a monthly Nepali magazine Hamrodhwani. She has achieved many other awards from Asom Sahitya Sabha, Govt. of Sikkim and different organizations from the different parts of the world.  The woman, like Geeta Upadhyay has created herself as a living bridge, which is connecting with each other to unite different communities of the state & this region. For her this hard work, she has been honored with ‘Friendship award’.

From the above discussion, it can be said that the contribution of Professor Upadhyay to build a united society in the midst of multi-lingual region like Assam is incomparable. She proves that the effort of an unmarried woman can unite a multi-lingual society through the culture and literature.

N.B. The author of the article has presented two National Seminar papers on Prof. Geeta Upadhyay, viz; - 1. “The Contribution of Geeta Upadhyay in the Culture and Literature of Assam”  {“National Seminar on Women and Media: Challenges and Opportunities” organized by Centre of Bangladesh Studies, In Collaboration with The Department of Bengali and The Department of Mass Communication, Assam University, Silchar  and Sponsored by NATIONAL COMMISSION FOR WOMEN, NEW DELHI ( 3rd March to 4th March 2014)}.